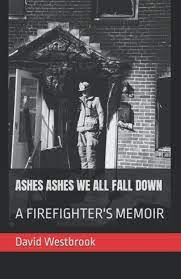 Ashes Ashes We All Fall Down, A Firefighter's Memoir

After twenty-six years in public safety, David Westbrook was at the top of his game. Married with four children, a former police officer, paramedic, firefighter and Lieutenant for the Baltimore County Fire Department, he was "living the dream". What he didn't know was that after years of repeated exposure to trauma such as children dying in his arms, an entire family being burned to death in a house fire, a police officer suicide and even a line of duty death within his own department, his dream would soon become a nightmare. Left untreated, David's undiagnosed PTSD began to change him, as his life began to spiral out of control. It wasn't until after hitting rock bottom, he realized he had a problem. The silent beast living inside him had stolen his happiness, confidence and his will to live. Lost, lonely and a broken shell of a man, David began to pick up the pieces and put his life back together. All of his self-destruction could have been avoided had he simply admitted there was a problem and not been afraid to ask for help. His pride along with the stigma associated with seeking mental health treatment within the fire service prevented him from asking for the help he so desperately needed, which nearly cost him his life. In this MUST-READ memoir, David gives a firsthand account of the damages that remaining silent caused him, and his family to endure. Intertwined with real life comedic experiences from his time on the job, it is sure to have you laughing as you learn a thing or two about mental health among firefighters and paramedics and the trauma they face from day to day. It's time to erase the stigma.