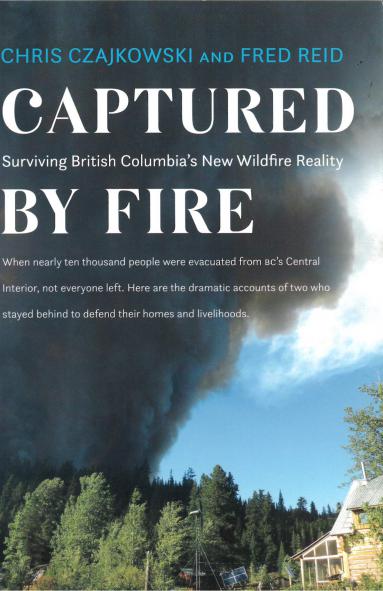 In the summer of 2017, wildfires dominated the headlines in British Columbia. As a low pressure weather system continued to cause lightning strikes, starting new fires, strong winds fanned the existing ones. Over two hundred fires burned in the province and nearly ten thousand people in or around the towns of 100 Mile House, Ashcroft, Cache Creek, Princeton and Williams Lake received the instruction YOU MUST EVACUATE NOW. But not everyone left.

Captured by Fire alternates between the dramatic first-person accounts of wilderness dweller Chris Czajkowski and homesteader Fred Reid, who both ignored the evacuation order and stayed to protect their properties, animals and livelihoods. Living in a remote area, they knew that their homes would be of low priority to officials when fire fighting resources were deployed. Over the course of the summer, as alerts fluctuated and even the firefighters pulled out, both had to decide: when is it time to go?

Watkins and co-author Peter H. Daly address the crucial differences between the private and public sectors that go to the heart of how success and failure are defined, measured, and rewarded or penalized. This concise, practical book provides a roadmap to help new government leaders at all levels accelerate their transitions by overcoming nine transition challenges, ranging from clarifying expectations to defining goals to building a team to managing personal stress. The authors also offer detailed strategies for avoiding major "transition traps."

Zeroing in on the challenges facing new government leaders, The First 90 Days in Government is an indispensable guide for anyone seeking to lead and succeed in the public sector.