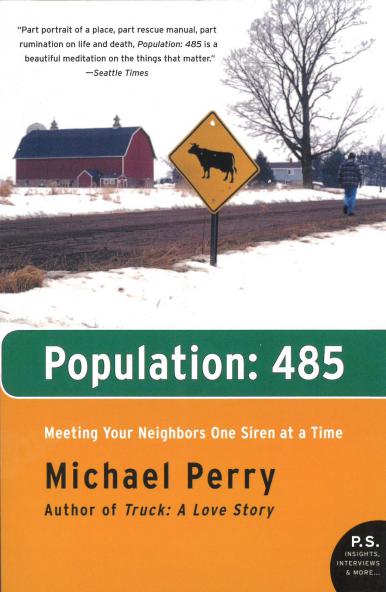 “Part portrait of a place, part rescue manual, part rumination of life and death, Population: 485 is a beautiful meditation on the things that matter.”  — Seattle Times

Welcome to New Auburn, Wisconsin (population: 485) where the local vigilante is a farmer’s wife armed with a pistol and a Bible, the most senior member of the volunteer fire department is a cross-eyed butcher with one kidney and two ex-wives (both of whom work at the only gas station in town), and the back roads are haunted by the ghosts of children and farmers. Michael Perry loves this place. He grew up here, and now—after a decade away—he has returned.

Unable to polka or repair his own pickup, his farm-boy hands gone soft after years of writing, Perry figures the best way to regain his credibility is to join the volunteer fire department. Against a backdrop of fires and tangled wrecks, bar fights and smelt feeds, Population: 485 is a comic and sometimes heartbreaking true tale leavened with quieter meditations on an overlooked America.