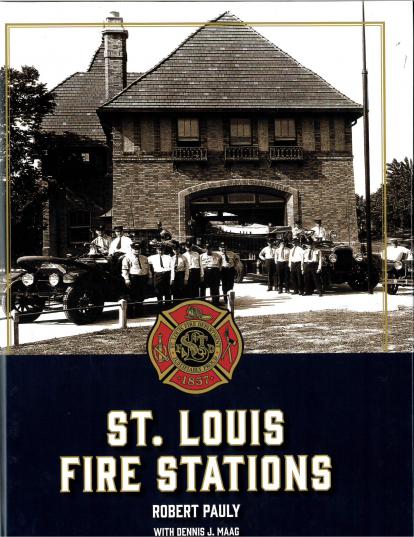 A history book unlike any other, St. Louis Fire Stations is filled with rare and never-before-seen photos, detailing each St. Louis Fire Department station from the early 1800s to those operated today. Accompanying the images of fire stations are photos of firefighters and firefighting apparatus along with detailed historical accounts of each station, as well as the equipment and personnel assigned to them.

Explore the history of this vitally important and often forgotten pillar of the community from its early days as a volunteer institution. Read about Fire Station 7, built in 1873 but destroyed by a tornado in 1896. Enjoy the varied architectural styles of these historic stations, from the more ornate of the 1800s and the Art Deco EMS Headquarters built in 1936 to the Mid-century Modern St. Louis Fire Department Headquarters. Catch a glimpse of unique facilities such as the Horse Hospital and the 1904 World’s Fair Fire Station along with the “survivors”—stations that operated around the turn of the twentieth century that are still around today.

Whether your interest is in the fire service, architectural history, or the history of St. Louis itself, St. Louis Fire Stations provides a fascinating look at one of the longest-serving fire departments in the United States.