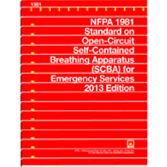 Get up-to-speed on SCBA rules that safeguard the lives of first responders.