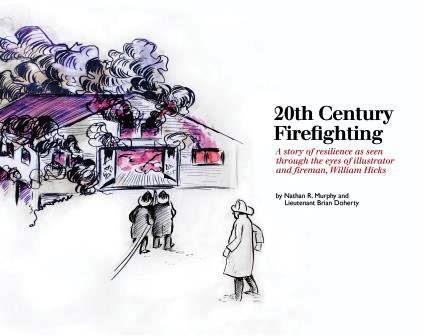 The early 20th Century was a time of transition for American fire services. The volunteer fire departments were being replaced by permanent firemen. Also, motorized engines were replacing the horse drawn steamers and automobile accidents were a new challenge for the firemen.

For the first four decades of the 20th Century William J. Hicks served as a fireman in Milton, a town just outside of Boston, Massachusetts.

Between 1899 and 1942 he sketched the day-to-day activities of the Milton Fire Department.

His sketches are a unique collection that have been preserved by the Milton Auxiliary Fire Department, led by Captain John Fleming.

These sketches offer an insider's perspective of the calls that these firemen responded to, the perils of rescues they performed, and the changing times both within the department and in the world around it.

The sketches also depict the espirit de corps and resilience that are essential characteristics of every firefighter. Included are sketches of Milton firemen killed in the line of duty. Hicks sketched each of these firemen doing the job that he too loved. Despite these losses, Billy and his fellow firemen found the resilience to persevere.

Today's firefighters can benefit to understand how humility, humor, and a gracious attitude helped Billy to finish a 43 year career as a firemen.

Billy answered over 10,000 calls during his career.

A portion of the proceeds from the sale of each book supports the fire department archives, which maintain the original sketches. 11 1/2" X 9", 70 color and black-and-white illustrations, 60 pages, softcover

About the Authors: The book was completed by Nathan Murphy to fulfill his Boy Scout Eagle requirement (Billy Hicks was his great, great grandfather). His co-author, Lieutenant Brian Doherty, is a Milton firefighter and has served as the President of the town's historical society.
SpecificationsNathan R. Murphy and Lieutenant Brian Doherty, 2015
11 1/2" X 9" softcover
60 pages, 70 color and black-and-white illustrations
ISBN: 978-0-9967322-0-8