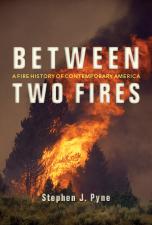 Between Two Fires is America's history channeled through the story of wildland fire management. Stephen J. Pyne tells of a fire revolution that began in the 1960s as simple suppression and then was replaced with more enlightened programs of fire management. It then explains the counterrevolution in the 1980s that stalled the movement, and finally describes the fire scene that has evolved since then.

In Between Two Fires, Pyne recounts how, after the Great Fires of 1910, a policy of fire suppression spread from America's founding corps of foresters into a national policy that manifested itself as a costly all-out war on fire.

After fifty years of attempted fire suppression, a revolution in thinking led to a more pluralistic strategy for fire's restoration. The revolution succeeded in displacing suppression as a sole strategy, but it has failed to fully integrate fire and land management and has fallen short of its goals.

Today, the nation's backcountry and increasingly its exurban fringe are threatened by larger and more damaging burns, fire agencies are scrambling for funds, firefighters continue to die, and the country seems unable to come to grips with the fundamentals behind a rising tide of megafires. Pyne has once again constructed a history of record that will shape our next century of fire management.

Between Two Fires is a story of ideas, institutions, and fires. It's America's story told through the nation's flames.