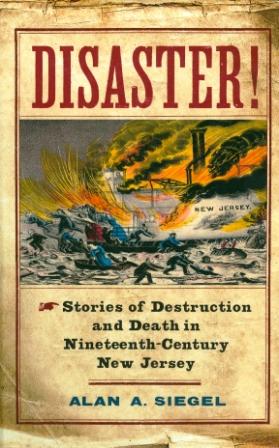 By every measure, Hurricane Sandy was a disaster of epic proportions. The deadliest storm to strike the East Coast since Hurricane Diane in 1955, Sandy killed thirty-seven people and caused more than $30 billion in damages in 2012 to New Jersey alone. But earlier centuries experienced their own catastrophes.

In Disaster!, Alan A. Siegel brings readers face-to-face with twenty-eight of the deadliest natural and human-caused calamities to strike New Jersey between 1821 and 1906, ranging from horrific transportation accidents to uncontrolled fires of a kind rarely seen today.

As Siegel writes in his introduction, “None of the stories end well—there are dead and injured by the thousands as well as millions in property lost.” Accounts of these fires, steamboat explosions, shipwrecks, train wrecks, and storms are told in the words of the people who experienced the events firsthand, lending a sense of immediacy to each story.

Disasters bring out the worst as well as the best in people. Siegel focuses on the bravest individuals, including harbor pilot Thomas Freeborn who drowned while attempting to save fifty passengers and crew of a ship foundering on the Jersey Shore, and Warwicke Greene, a fourteen-year-old schoolboy who rescued the injured “like the hero of an epic poem” after a train wreck in the Hackensack Meadows. These and many other stories of forgotten acts of courage in the face of danger will make Disaster! an unforgettable read.