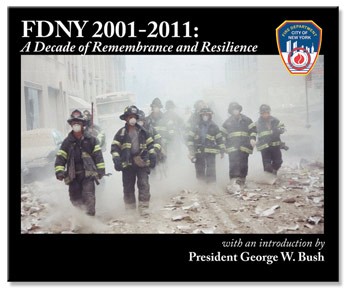 This book, published by FDNY, is the official commemorative book for the 10th anniversary of the 9/11 attacks, featuring an introduction by former President George W. Bush.

It contains exclusive photos, some never seen before, culled from the Department's official archive and includes interviews with dozens of FDNY members who responded that day and worked in the aftermath.

It chronicles, through photos and words of FDNY members, the department's efforts to rebuild and feature major operations since 9/11, including FDNY's response to Hurricane Katrina and Haiti, the Miracle on the Hudson, the Manhattan crane collapse and the plane crash in Queens just two months after 9/11.