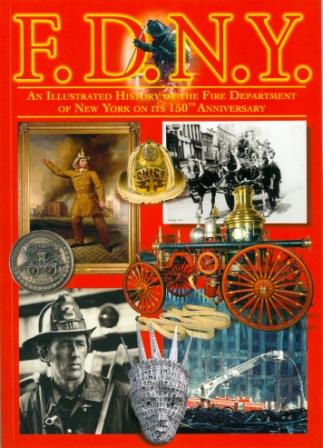 Since the earliest years of city history, New York’s firefighters have put their lives on the line to protect its citizens from fire.

Written by experts on Fire Department history, this book documents the evolution of city firefighting from the earliest bucket brigades through to the post Department, largely through the collection of the NYC Fire Museum.

Along the way, it documents the organizational improvements and political changes that have made city firefighting significantly more effective.

This book also tells the tale of the greatest fires that threatened New York, including the Great Fire of 1835 and the 1911 Triangle Shirtwaist Fire. It includes the attack on the World Trade Center and looks beyond from the perspective of the months following the first anniversary of that traumatic day when hundreds of New York’s Bravest tragically lost their lives.

For the 150th anniversary of the department’s founding, the second edition of F.D.N.Y. An Illustrated History adds 16 pages on the department’s improvements since 9/11. Packed with photos showing how firefighters are dealing with 21st century threats such as the continuing challenge of terrorism, the 2003 Blackout, and Hurricane Sandy. 200 color and black & white illustrations