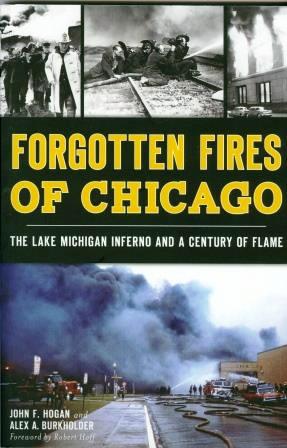 Chicagos war against cinder, flame and smoke did not end with the Great Fire of 1871. That conflagration was only one engagement in a ceaseless and often unrecognized conflict, fought in the most unlikely places.

In 1909, fire ripped through the dynamite room of a staging facility one and a half miles off the Lake Michigan shoreline, transforming the pipe-laying operation into a raging inferno.

During the Worlds Columbian Exposition, thousands of fairgoers watched in horror as twelve firefighters were trapped in a blazing ice warehouse. An operagoer left a smoking bomb under his seat at the Auditorium Theater in 1917, and the newly invented smoke ejector arrived too late to save firemen and laborers cut off in a sewer in 1931.

Join John Hogan and Alex Burkholder for the history of these forgotten fires and the heroes who fight them.