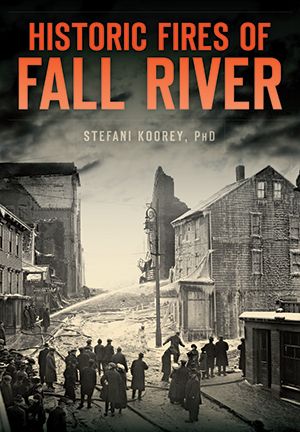 Fall Rivers textile boom in the nineteenth century brought with it a series of fiery disasters.

The Big Fire of 1843 left more than one thousand people homeless and destroyed two hundred buildings, as well as twenty-some acres of land.

After the Steiger Store Fire of 1916, mill owners pushed the city to replace horse-drawn brigades with fire engines.

The intense heat from the Kerr Mill Thread Fire of 1987 melted hoses as first responders battled the blaze.

Author Stefani Koorey chronicles the historic infernos of the Spindle City and celebrates the communitys resilience in the face of adversity.

About the Author: Stefani Koorey holds a doctorate in theater history and dramatic criticism and a masters of science in library science, digital libraries. She is the editor and publisher of the Literary Hatchet, as well as the editor/owner of PearTree Press, specializing in Fall River history, the Borden murders of 1892, true crime, poetry and quirky fiction. With Al Lima, she is the co-founder of the Fall River History Club.
SpecificationsThe History Press, 2016
6" x 9" softcover
160 pages, 53 black & white photos
ISBN: 9781467119245