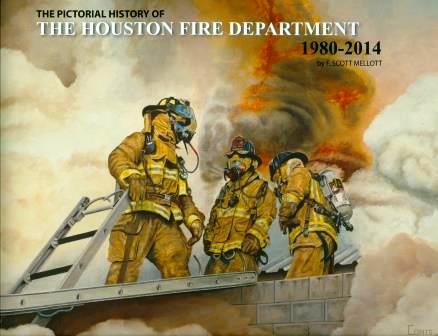 During the time frame covered, not only has firefighting changed, but so has the city of Houston. This book demonstrates the changes and its impact on the HFD.

The HFD, a paid department since August 1895 and the 4th largest fire department in the United States, is located in Harris County, Texas. It is responsible for protecting 2.19 million people within an area of almost 600 square miles. Houston has over 4,000 firefighters, 92 active fire houses and 840 firefighters on duty at any time.

The author's emotional driving force for this book was the May 31, 2013 Southwest Inn 5 alarm fire which comprises a significant portion of the book and includes images from the fire as well as the memorial service.

The book is dedicated to the four firefighters who lost their lives that day, including the second HFD female firefighter to die in the line of duty. As a special tribute, each family was given two pages for photos and text to memorialize their loved ones.

The last section covers "In Memoriam" and includes the names of all of HFD's line of duty deaths since the department went from volunteer to a paid department in 1895. Also included are various HFD firefighter funeral and memorial service photos.

All copies are autographed by the author.