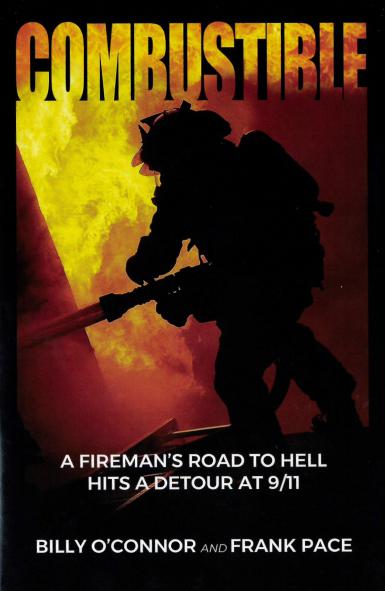 Combustible: A Fireman's Road To Hell Hits A Detour At 9/11

Conor Kilcullen is an adrenaline junkie.

A longtime member of the New York City fire department, Conor will be the first to charge into a blazing apartment or crawl down a smokey hallway to save a trapped infant. Conor is also a cocaine addict, an alcoholic, and an inveterate gambler who blames God for his first wife’s tragic early death. It is a combustible combination.

Co-written by a retired NYC fire lieutenant who was a 9/11 first responder, Combustible accurately depicts the procedures and operations of the FDNY while focusing on one troubled firefighter. The novel illustrates how the strength of the brotherhood sometimes erases the border between friends and family.

While fighting fires in a busy Bronx station stocked with screwballs, Conor battles atheism, alcoholism, and his inner demons. The tension in Combustible builds not only through the dangerous fire scenes and the accurate depictions of these Bronx firefighters, but to a subplot that finds Conor torn between the virtuous Colleen and the girl of his salacious dreams — an Australian whom he meets while on holiday in New Orleans. An already Combustible situation quickly accelerates when she is transferred to New York.

The book makes a cataclysmic detour at 9/11. Conor has several decisions to make . . . decisions that will shape the remainder of his life.

About the author: Billy O'Connor

In Billy O’Connor’s colorful life, the Irish immigrant was a Vietnam vet, a Teamster, an inveterate gambler, an illegal bookie, a bar owner, and an alcoholic and drug user. Billy also served twenty years with the New York City Fire Department and was a first responder at Ground Zero.