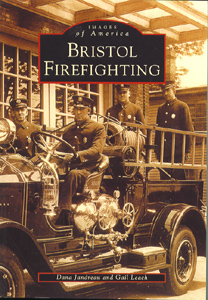 By Dana Jandreau and Gail Leach

In 1845, a series disastrous fires nearly crippled the economy of Bristol, Connecticut.

Earlier in the century, the community had become one of the leading clock producers in the world, and this astounding success spawned many other local businesses. As the factories multiplied, so did the need for fire protection; unfortunately, when the whirlwind of fires struck, Bristol was unprepared and suffered heavy losses. Yet, it was not until eight years later that three prominent businessmen look the first steps toward organizing a fir company.

In September 1853, a firehouse was built on School Street and it was equipped with a used hand pump and five hundred feet of leather hose. It became Bristol Engine and Hose Company No. 1.

With some two hundred stunning images, Bristol Firefighting relives the fire department’s proud history over the past one hundred fifty years, as the old hand pump gave way to an 1881 Amoskeag steamer drawn by horses, which in turn moved aside in the early 1900s for a Pope-Hartford, a motorized auto chemical truck, which changed firefighting forever.

Years later, Bristol was recognized throughout the country for owning the first American La France foam pumper, appropriate1y known as the Bristol Model.

Bristol Firefighting recalls firsthand accounts of many infamous fires, told through the eyes of the local people who witnessed them. Most dramatically, it relates the stories of heroism, sacrifice, and bravery displayed by firefighters in their unending desire to serve and protect their community.

About the Authors:
Dana Jandreau is a captain and twenty-five-year veteran of the Bristol Fire Department.

Gail Leach is president of the Bristol Historical Society.

Together, they have assembled an extraordinary collection of photographs and vivid narrative depicting the times and events that have made the history of the Bristol Fire Department truly unique.