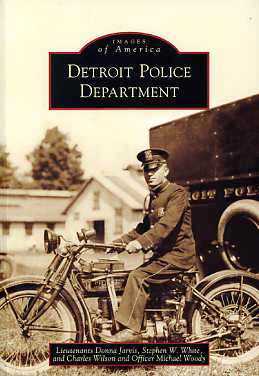 Since its inception in 1865, the Detroit Police Department has been a trailblazer and pioneer in adopting revolutionary advances in law enforcement that are essential to policing today.

The Detroit Police Department was among the first police departments to put its officers on bicycles and developed one of the earliest motorized forces using motorcycles, ultimately becoming the first department to utilize Harley Davidson motorcycles. Of its firsts, arguably the most important and synonymous with the city of Detroit being recognized as the “Automotive Capital of the World” is the department’s deployment of its first patrol car in 1909.

This photographic book highlights the Detroit Police Department’s rich history, resplendent with groundbreaking advancements in the field of law enforcement. Over the years, many of the issues that proved challenging to large metropolitan cities, such as urban unrest, school busing, labor disputes, crime, and poverty, also produced challenges for the department.

This book illustrates how the department met those challenges and continued to serves its community with the utmost professionalism, respect, and pride. The vision of the Detroit Police Department is “building a safer Detroit through community partnerships,” a with the unquestioned dedication and hard work exhibited by Detroit’s fi nest, this vision has become a reality.

ABOUT THE AUTHORs:
This project was sponsored by the Detroit Police Foundation, a nonprofit organization. The authors viewed hundreds of photographs from a variety of sources that included the department’s museum and archives, Detroit Free Press, Detroit Public Library, Wayne State University, and current and retired department members. Without their assistance, this project would not have been completed.