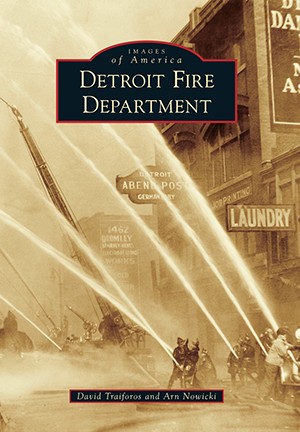 Once known as the Paris of the West, Motown became synonymous with urban abandonment and arson as job and population decline took hold in the late 20th century.

No other fire department has experienced the hardships of the job on such a consistent basis as the Detroit Fire Department (DFD).

Detroit firefighters have ridden the waves of unprecedented prosperity and tragic decline. Determined faces mask many layoffs, station closings, and a reduction in workforce.

Despite these perils, dedication and the belief in their city remains a constant among Detroit firefighters. The official Detroit motto, We hope for better things; it shall rise from the ashes holds as true today as it did when first uttered over 100 years ago.

About the Author: David Traiforos is a retired fire chief with over 40 years of experience in the field. Traiforos has been documenting the history of the DFD for 20 years. Lt. Arn Nowicki brings over 25 years of service with the Detroit Fire Department to this work. Also an executive member of the Detroit Firemens Fund, Nowicki honors firefighters across the state through the operation of the Fallen Firefighters Memorial Rig.

Images featured in this work were compiled largely from private collections, the Detroit Firemens Fund, and the Detroit Historical Society.