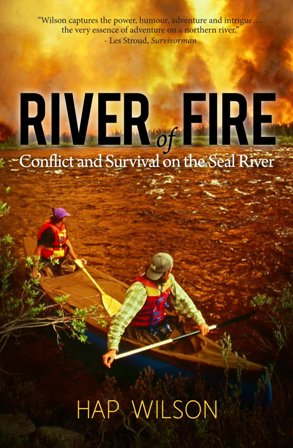 New York’s Men’s Journal Magazine hired a studio photographer from Brooklyn, a post-master/writer from Thermond West Virginia and two Canadian river guides to paddle one of the country’s most dangerous whitewater rivers – the Seal in northern Manitoba, for the purpose of publishing the quintessential Canadian adventure story.

Add to this unlikely melange of characters, the possibility of capsizing in freezing water, the threat of polar bears, a midnight sail down Hudson Bay and Manitoba’s worst boreal wild fire, this chronicle will carry the reader to the extreme edge of exploration.

“In River of Fire, Wilson captures the power, humour, adventure and intrigue…. the very essence of adventure on a northern river. Now, more than ever, society needs to re-awaken to the life-changing and profound experience that is time and travel in the natural and still wild world. In a manner of storytelling worthy of Aldo Leopold and John Muir, Hap Wilson’s River of Fire will indeed light your soul on fire and into a yearning for still possible wilderness adventure.” – Les Stroud aka Survivorman