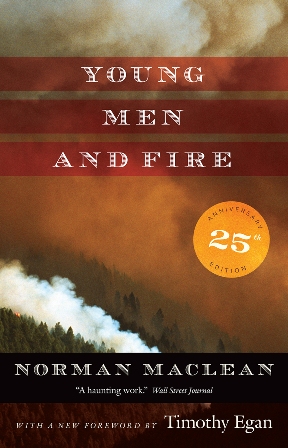 Reprinted to celebrate the book's 25th anniversary with a new Foreword by Timothy Egan!

A devastating and lyrical work of nonfiction, Young Men and Fire describes the events of August 5, 1949, when a crew of fifteen of the US Forest Service’s elite airborne firefighters, the Smokejumpers, stepped into the sky above a remote forest fire in the Montana wilderness. Two hours after their jump, all but three of the men were dead or mortally burned. Haunted by these deaths for forty years, Norman Maclean puts together the scattered pieces of the Mann Gulch tragedy in Young Men and Fire, which won the National Book Critics Circle Award.

Alongside Maclean’s now-canonical A River Runs through It and Other Stories, Young Men and Fire is recognized today as a classic of the American West. This twenty-fifth anniversary edition of Maclean’s later triumph—the last book he would write—includes a powerful new foreword by Timothy Egan, author of The Big Burn and The Worst Hard Time. As moving and profound as when it was first published, Young Men and Fire honors the literary legacy of a man who gave voice to an essential corner of the American soul.