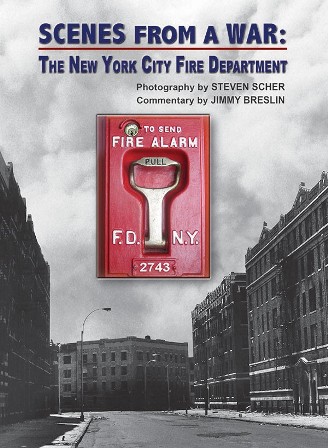 Scenes From A War: The New York City Fire Department

A historic new look at the New York City Fire Department through the eyes of photographer Steven Scher!

Scenes From a War gives a visual and written feel to unique events and periods in New York Citys history. Using the photographic talent of Steven Scher and the inspired reporting of Pulitzer Prize-winning writer Jimmy Breslin, the reader will get to see what those times were like.

About the Photographer: Raised in The Bronx, Steven Scher began chasing fire engines at the age of twelve. After graduating from American International College with a degree in sociology, he has held numerous jobs in city government and media. He has been a photographer to a mayor; a television cameraman covering Washington, DC; a fire alarm dispatcher; and a fire department press secretary. He is an Honorary Assistant Chief of the FDNY.
SpecificationsMT Publishing, 2017
9" x 12" hardcover
160 pages, B&W and color photos
ISBN: 9781945306631