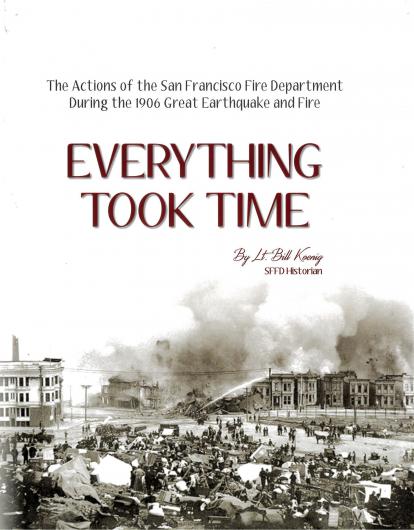 Everything Took Time: The Actions of the San Francisco FD During the 1906 Great Earthquake and Fire

At 5:12 on the morning of April 18, 1906, a mild foreshock shook San Francisco. Twenty-five seconds later, the Great Earthquake, lasting almost a minute, devastated the City. In San Francisco, this historic event is more often referred to as the Great Fire.

Within the first hours, 52 fires spread across the City. The quake destroyed the central fire alarm and telephone systems; thus, no alarms sounded to the 584 members of the Fire Department. The department was without any means of communication; every company was on its own.

The engine companies responded to visible fires but discovered the quake had broken most of the water mains. As firefighters searched desperately for working hydrants, small-unchecked building fires merged into large, uncontrolled fires. Before long, the conflagration engulfed 4.7 square miles of the City.

Despite these setbacks and challenges, the San Francisco Fire Department fought on, day and night until, late in the evening on April 20th, they extinguished the fire and saved the City.

Everything Took Time transports you to those three eventful days in April 1906 to experience the heroic battle of the San Francisco firefighters. Author Bill Koenig gives the events immediacy citing contemporary newspaper articles and takes you behind the scenes with previously unpublished officers’ reports. Leave your 21st-century viewpoints behind and read how the department managed a disaster of this magnitude without the tools we have today.