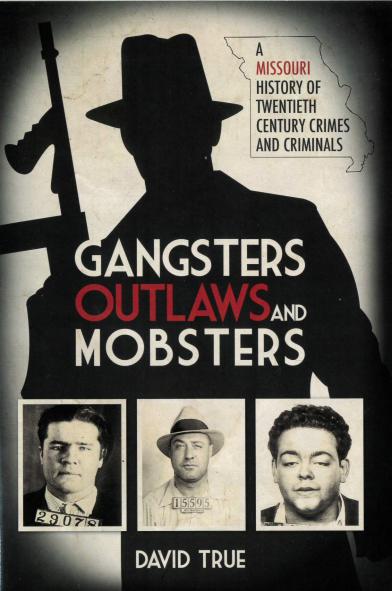 When people think of organized crime, the cities of Chicago, Las Vegas, and New York come to mind, but the state of Missouri has produced a long list  of high profile criminals known across the nation. In fact, Pretty Boy Floyd, Bonnie and Clyde, Machine Gun Kelly, and Fred “Killer” Burke—all high on the FBI’s most wanted list—had ties to the state.

In Gangsters, Outlaws and Mobsters – A Missouri History of Twentieth Century Crimes and Criminals, retired ATF agent and author David True details the true stories of the state’s most notorious criminals.

Missouri native David True, who grew up in the shadow of the St. Louis underworld, has compiled an exhaustive list of Missouri’s most notorious criminals based upon three decades of research and insider knowledge from investigating gangland crimes and criminals.

Read Gangsters, Outlaws and Mobsters and see the dark side of Missouri too disturbing to be discussed in travel guides!

About the author: David True

David True began his career as a public servant from 1966 to 1968 as an Explosives Ordnance Disposal Specialist (EOD) in the United States Army. From 1968 to 1971, he was a St. Louis Metropolitan police officer and detective, assigned to the Bomb and Arson Unit in the homicide division. He joined the ATF in 1971, assigned to the St. Louis and Kansas City offices, performing duties in various capacities as an agent and supervisor. He retired from ATF in 1997 after twenty-six years of service, and accepted a position as a corporate security manager and investigator with Yellow/Roadway Corporation (YRC) until retiring in 2013.