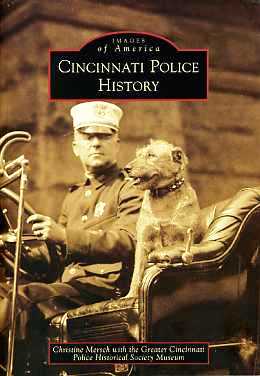 The Village of Cincinnati appointed its first marshal, James Smith, in 1802. Today the Cincinnati Police Department boasts a dedicated staff of more than 1,000 sworn officers.

Throughout its 200-plus years, the department has celebrated many firsts, such as being the first police agency to use telephones, and has also persevered through some difficult times, the most recent being the 2001 race riots.

The Cincinnati police have won such awards as the Best Community Police Program by National League of Cities, the Governor’s Community Policing Award of Excellence, and more than 35 local, state, national, and international awards. Programs like the Cadet/Intern Program, the Civilian Volunteer Program, the Juvenile Aid Bureau, the Youth Services Section, and the Citizens Police Academy are ways the police have reached out to the community to educate and protect over the years.

ABOUT THE AUTHOR:
Cincinnati native and professional journalist Christine Mersch collaborated with the Greater Cincinnati Police Historical Society Museum to create this comprehensive book written to honor the service of Cincinnati’s finest. Using almost 200 vintage images, Mersch chronicles the early beginnings of the city’s police department, notable times of unrest, major social and technological advances, and those who valiantly died in the line of duty.