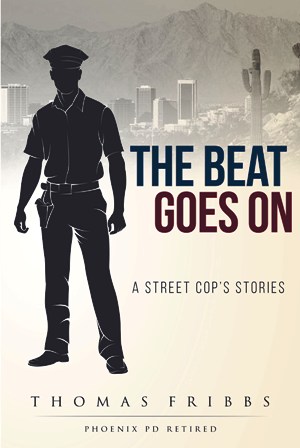 The Beat Goes On: A Street Cop's Stories

Phoenix, Arizona, is our nation's fifth largest city as of 2016 it's population of 1.6 million people was spreed out over 517.6 square miles. Its police department is currently made up of seven patrol precincts with 2,900 sworn officers. Don't do the math of officers per square mile; it will scare you. At the heart of all this remains a beat patrolled by a street cop.

The author served twenty-five-plus years with the Phoenix Police department. This story attempts to take you down dark places with often funny outcomes. It's all true; you can't make this stuff up.

A picture of routine days interrupted with emergency calls and sometimes pranks played. The story will have you rocketing down city streets in high-speed pursuits right into chaotic hospital emergency rooms. Life-and-death dramas play out amidst simpler times. A picture of East Van Buren (EVB) in the1980s will emerge, exposing its violent underbelly of prostitution, drugs, and general lawlessness. Experience the organized confusion of a big-city airport as security breaches occur. Enjoy the ride.

He would have done it for free if he didn't have bills to pay. Police officers worldwide are the thin blue line. Picture a world without them.