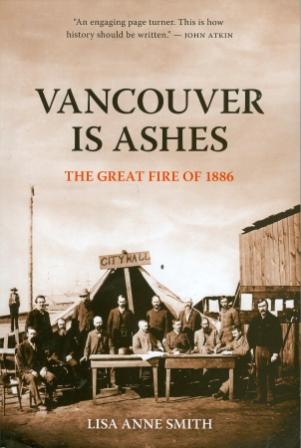 Vancouver is Ashes: The Great Fire of 1886

On the morning of June 13, 1886, a rogue wind fanned the flames of a small clearing fireand within five hours, the newly incorporated city of Vancouver, British Columbia, had been reduced to smoldering ash.

Vancouver is Ashes: The Great Fire of 1886 is the first detailed exploration of what happened on that pivotal, yet seldom revisited day in the history of Canadas third-largest city.

Lisa Anne Smith tells the story with numerous archival photographs. She uses eye-witness accounts to describe flames sweeping down wooden sidewalks faster than a man could run, houses that were constructed of freshly milled lumber, which virtually exploded in the onslaught, as well as hair-breadth escapes of Vancouver citizens from all walks of life.

She records how two businessmen lying face-down in a patch of gravel bid each other goodbye, while a young married couple cling to a makeshift raft, and a mother and her children cower in fear beneath a stable blanket in a shallow ditch.

Strange, often unlikely stories emerge in the aftermath, such as the pile of ice discovered amidst the burned out wreckage and the near-miraculous survival of a downtown hotel.

Ramifications of the catastrophe that continued into the days, months and years following are examined, resulting in some surprisingly positive, as well as negative conclusions.

Part proceeds from sales of Vancouver is Ashes are being donated to the Vancouver Firefighters Charitable Society.