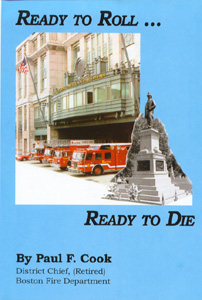 Ready To Roll...Ready To Die

BACK AGAIN IN LIMITED SUPPLY!

Chief Cook is among those Tom Brokaw calls the Greatest Generation. His writing is rich in humor as well as factual and inspirational.

The book is biographical as he describes growing up during the Great Depression; his World War II military service in Europe and then mainly his forty-plus years with the Boston Fire Department.

It is a unique history of the transition in the fire service as he reports on his stewardship to the taxpayers.

It is technical as he depicts the variety of incidents that firefighters cope with daily in addition to extinguishing fires.

And, finally, it is an inside look at the esprit de corps that exists among firefighters as they serve the public.