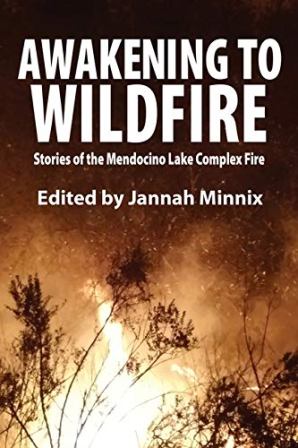 Awakening to Wildfire: Stories of the Mendocino Lake Complex Fire

The night of October 8, 2017, the wind howled, the land was arid, and humidity was low. At 11:36 PM a spark from a downed power line hit dry vegetation and started a small fire. It grew into a raging, racing inferno that would consume a massive part of a small town in northern California. The fire would forever change the lives of the people of Redwood Valley and their neighbors in nearby communities. Nine lives were lost, and hundreds of structures destroyed. This became known as the Mendocino Lake Complex Fire, or Redwood Valley Fire.

During and following the fire, what stood out were peoples' stories of their escapes, sorrows, miracles, and blessings: Friends lost; pets found; midnight drives on windy dirt roads through a smoky haze; flowers blooming in the ash--everyone had a memory to share.

Awakening to Wildfire captures dozens of these stories and presents them to you in written and visual mediums. Through this we hope to convey an idea of the magnitude and key moments of the fire, as well as the strength, courage, and resilience of those who survived it.